Aims
The aim of this study was to investigate the effects of a liposomal vitamin D supplement on blood levels of 25-OHD over a 4 and 8-week period.

Individuals with chronic illnesses, or who have taken vitamin D supplements within the last three months were excluded. Those currently taking medications such as anticonvulsants, steroids, antifungal agents or who have medical conditions related to malabsorption and bypass surgery, were also excluded due to possible interactions with vitamin D metabolism.

Blood samples were taken between December and February, therefore blood levels of 25-OHD are expected to be in the median range of the progressive decline in blood levels; typically seen during winter months between September and March (Webb et al., 2018).

Baseline samples were taken first thing in the morning during the fasted state.  Baseline samples were collected via finger prick using a lancet provided by Thriva (Thriva Co). Samples were posted for analysis on the same day of sample collection.  After a baseline blood sample was taken, the test product was then given to participants to self-administer.

Participants were divided into two groups; Group 60 and Group 120.  Subjects in Group 60 were instructed to take 1ml of a liposomal vitamin D3 suspension containing 1000IU (25mcg) per 1ml, after their first meal of the day and were instructed to follow this dosing protocol for eight weeks for a total of 60ml (Group 60) of the liposomal suspension.

Subjects in Group 120 were instructed to take an acute dose of 60ml containing 60,000IU (1500mcg) followed by a daily 2ml dose containing 2000IU (50mcg), after their first meal of the day, for 4 weeks totalling 120ml (Group 120). The selection criteria for the different treatment protocols were dependent on baseline levels of 25-OHD and those with the lowest levels were eligible for Group 120.

Data was analysed for normal distribution using the Shapiro-Wilks test for normality. The parametric paired t-test was used to compared means of matched samples for significance. The level of significance for both statistical tests was set at p=0.05. 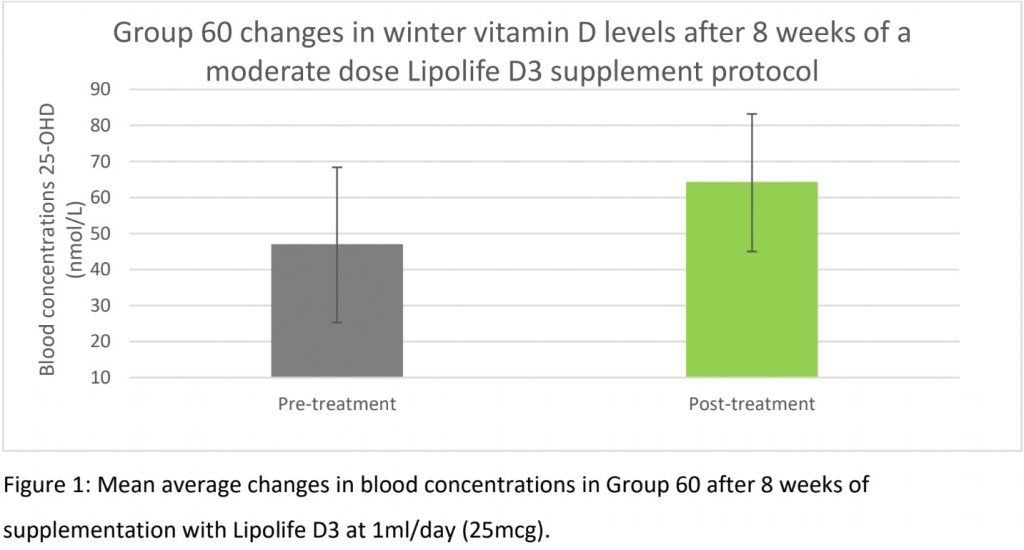 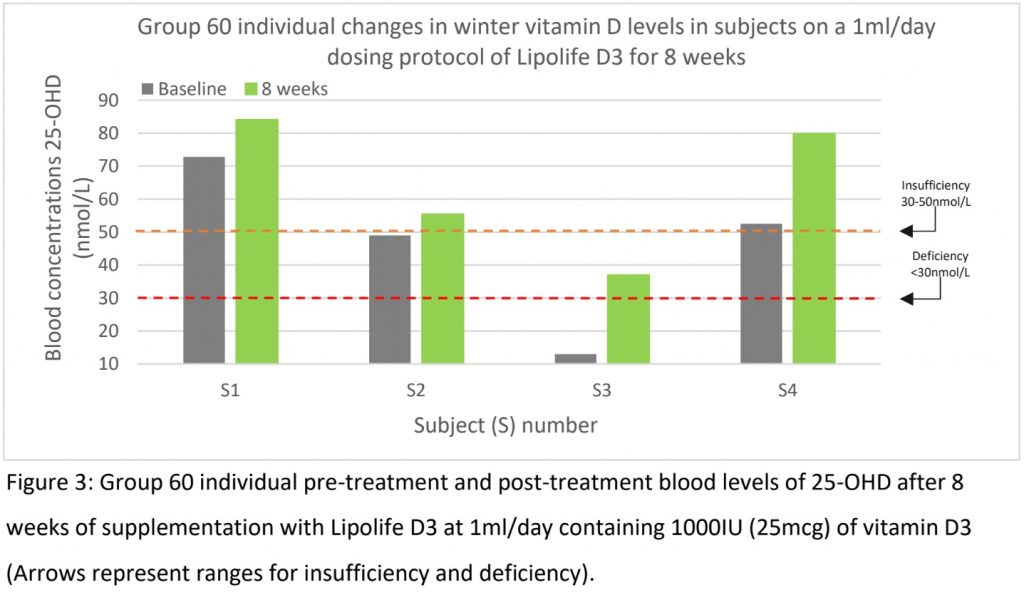 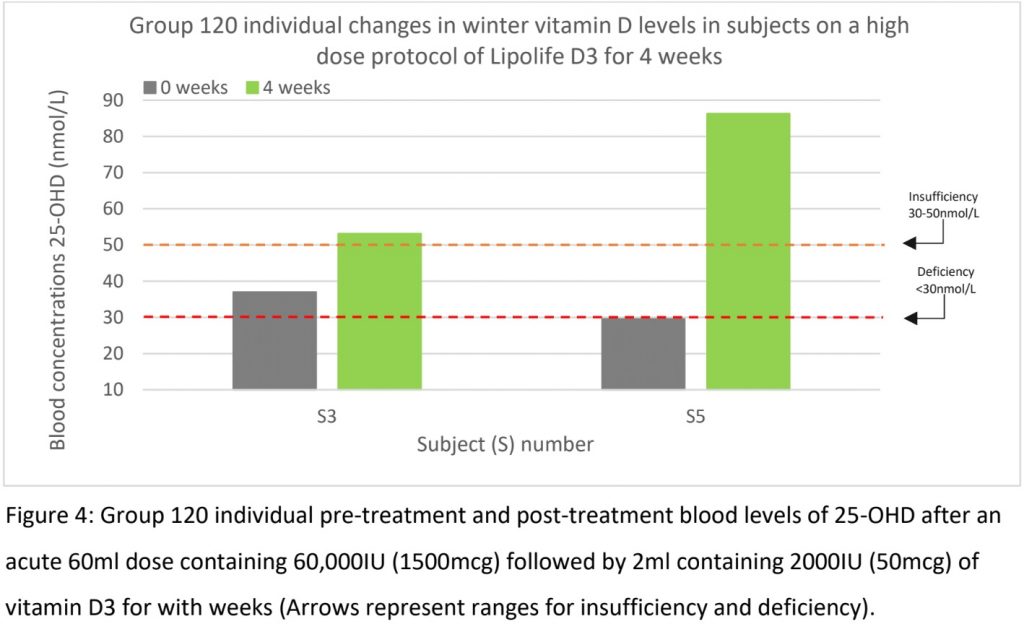 Discussion
This study investigated the effects of a Liposomal D3 (Lipolife) on the blood concentrations of 25-OHD. The vitamin D council recommends maintaining blood levels of >125nmol/L (Vitamin D Council, 2017). However, most researchers agree that the optimal ranges of 25-OHD are above 70nmol/L with the range extending up to 110nmol/L (Bischoff-Ferrari et al., 2009). It has been suggested daily intakes as high as 4000IU for several months are necessary to reach or maintain blood levels around 110nmol/L

In this study, we found a wide variation in the response to vitamin D supplementation which may be consistent with genetic variation or possible unidentified malabsorption.  As a large recent study showed, 7.4% of subjects do not experience significant increases in blood levels of vitamin D from intakes as high as 4000IU/day (Kimball et al., 2017).  The smallest response was seen in a subject (S2) whose blood levels increased to 121% as a result of daily treatment with 1000IU of vitamin D.

The subject (S3) who had the lowest baseline of vitamin D3 (13nmol/L) was considered to be critically deficient before the study of Group 60 commenced and had reported experiencing bone pain prior to volunteering.  A marked improvement was seen for this subject whose blood levels increased to 285%.  Near the completion of Group 60, this subject was invited to take part in Group 120 along with a new volunteer with similar blood levels of vitamin D. Subjects were instructed to consume 60ml of Lipolife D3 immediately as an acute serving and take 2ml/day thereafter for 8 weeks.  The subject (S3) showed a much slower response to treatment in Group 120 and blood levels only increased to 144% which could indicate the need for higher or longer dosing schedules as blood levels rise.  The data from Figure 1 and Figure 2 also suggests this in which Group 60 responded less significantly to liposomal vitamin D than Group 120.  These findings are consistent with recent evidence that suggests vitamin D levels rise quicker in those with lower circulating 25-OHD levels (Kaykhaei et al., 2019).

Although the statistical analysis returned P-values which did not reach significance, most subjects appeared to respond well to liposomal vitamin D and had improved vitamin D status as a result.  The lack of statistical power from such a small sample means a type II error is likely to have occurred and thus a larger sample is required to reduce the risk of this statistical error.

Future work should include larger samples, placebo-controls, and optimisation of dosing protocols.  For example, dosing schedules which are reflected by baseline levels of vitamin D and are structured on a dose amount/lb body weight calculation, may help eliminate intrasubject variation and would help provide more data for personalised dosing schedules. 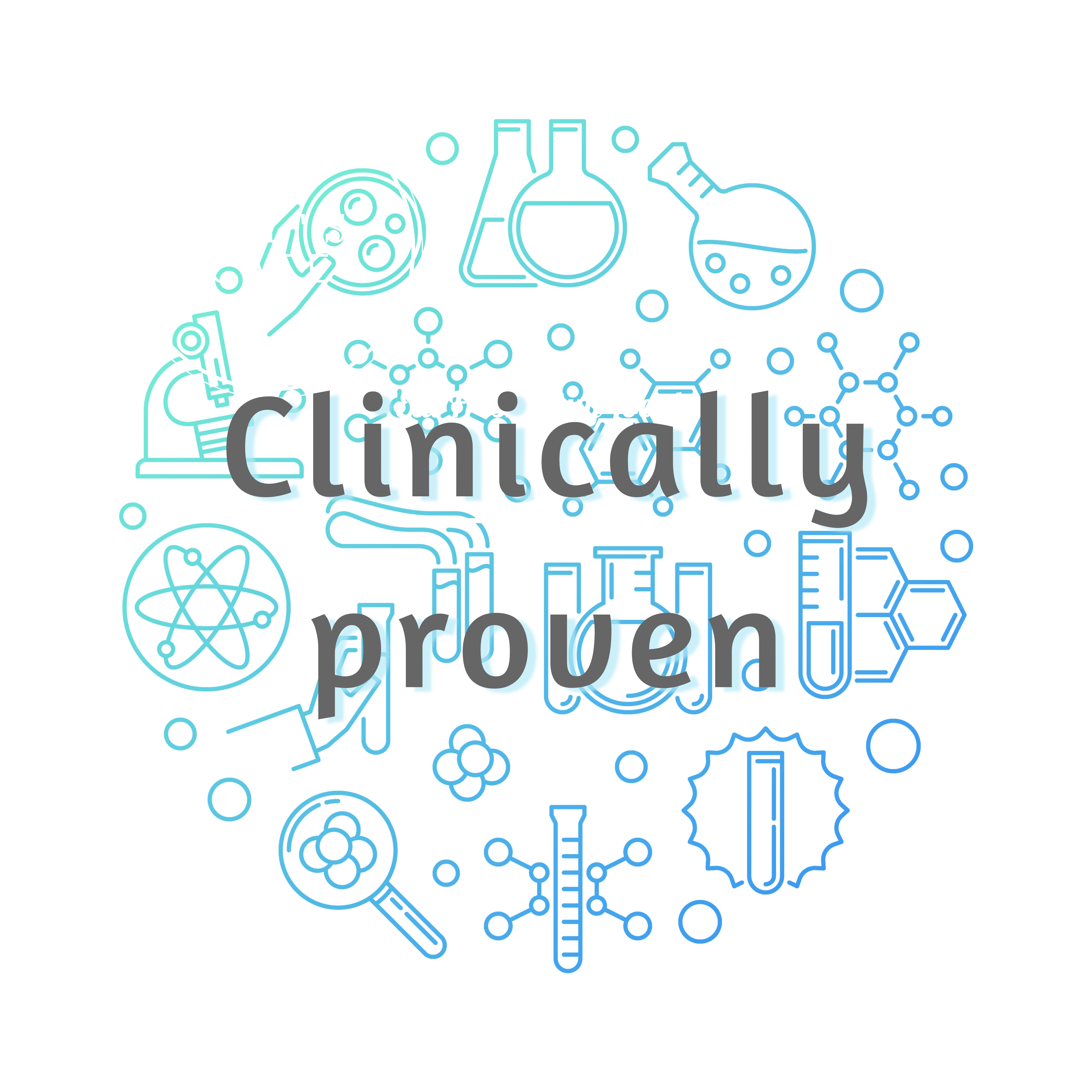 WHERE TO BUY
TOP

Ooh, we are excited. It’s time we let you know about some amazing developments. Over the coming months, you’ll see new bottles, new branding, new formulations and flavours of our premier liposomal vitamin supplements.

In addition to all the new and shiny things, we are giving you a chance to win a supply of lipolife for a whole year!

Enter to win lipolife for a year
See what's new