We commissioned an independent, simple yet comprehensive report on the bioavailability of 1g of liposomal Vitamin C (Lipolife® Gold) compared to 1g of non-liposomal oral Vitamin C.

Vitamin C plays a vital role in human health with some of its key functions including wound healing and neurotransmitter and carnitine synthesis. Vitamin C also functions as an important physiological antioxidant (Carr and Frei, 1999; Li and Schellhorn, 2007).

Unlike the majority of land animals, humans have not evolved to bio-synthesise Vitamin C and therefore it is an essential nutrient which can only be obtained from dietary intake (Drouin et al 2001).

Serum ascorbate levels are considered to be an appropriate reflection of bioavailability (Brubacher et al., 2000).

The bioavailability of Vitamin C has long been a controversial topic.  It once was incorrectly assumed by the National Institute of Health (NIH) that oral Vitamin C intakes >200mg resulted in an absorption threshold of 220µM/L (Ods.od.nih.gov) until recently disproved by Hickey et al (2008) in a pilot-study that showed concentrations of >235µM/L could be achieved with 5g liposomal and non-liposomal Vitamin C.

This was a significant finding for Vitamin C as a therapeutic agent since ascorbate concentrations at 300µM/L have resulted in 30% necrosis and apoptosis in cancer cells and concentrations at 400µM/L increased cell death to approximately 50% (Chen et al 2005).

By the end of the study both groups had been exposed to both treatments.

The design and protocol set out in this study complied with ICH GCP regulatory guidelines issued by CDSCO, Ministry of Health. 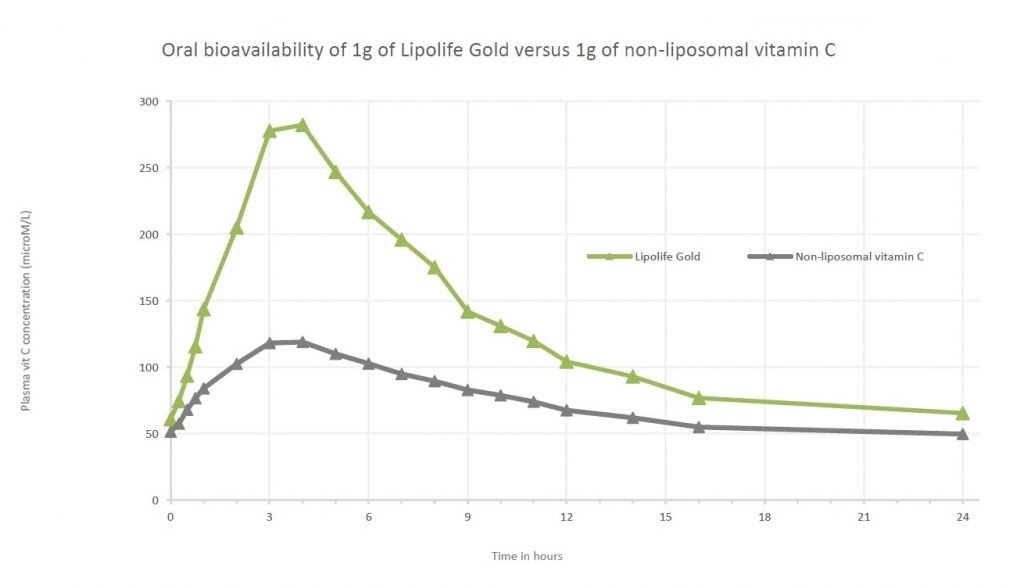 Liposomal Vitamin C lends itself as a promising therapeutic tool in the pursuit of targeting chronic disease with nutraceuticals agents.

Carr AC, Frei B. Toward a new recommended dietary allowance for vitamin C based on antioxidant and health effects in humans. Am J Clin Nutr 1999;69:1086-107.

WHERE TO BUY
TOP